The near collapse of the Eel House 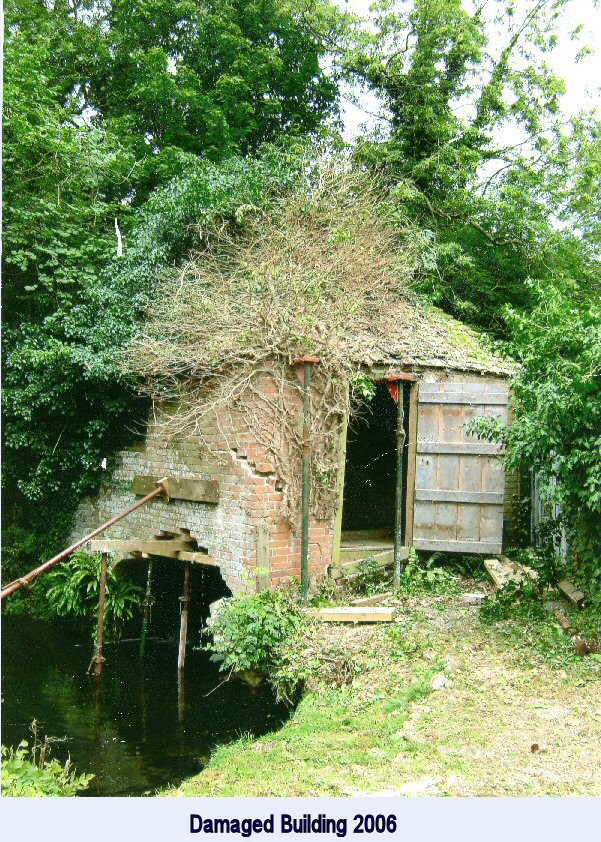 The Eel House is probably unique, and only one other such building features on the Historic England register of listed buildings (the Alresford Eel House is not listed). Since nets and many other devices can trap eels, we do not know why the owner built this structure to enclose the trap.

Nevertheless, we assume the estate owners used it regularly after its construction. By the 1960s Lt. Col. John Oliver-Bellasis (a Lord Lieutenant of Hampshire) owned this stretch of river, but soon after 1980 he sold the property. Unused, the Eel House began to deteriorate and by 2005 it was almost invisible, engulfed by ivy and surrounded by dense vegetation.

In 2006 two volunteers began to remove this – a job they did not expect would be difficult or expensive. As they cut the first thick stems of ivy, there was a loud crack: the South West corner of the building (to the left of the door) had collapsed.

Years of neglect had allowed the river to scour out the ground beneath the foundations, assisted by the roots of a nearby Ash. They had undermined part of the building and were advancing rapidly. There was a clear possibility that it would crumble into the river: all that was holding it up were the remaining strands of ivy.

The owner of the building moved swiftly to prop it up, and began consulting the interested parties - one owns the building, another the surrounding land, and a third the fishing rights. The Environment Agency and Natural England, as protectors of the sensitive and delicate river environment, were also involved. 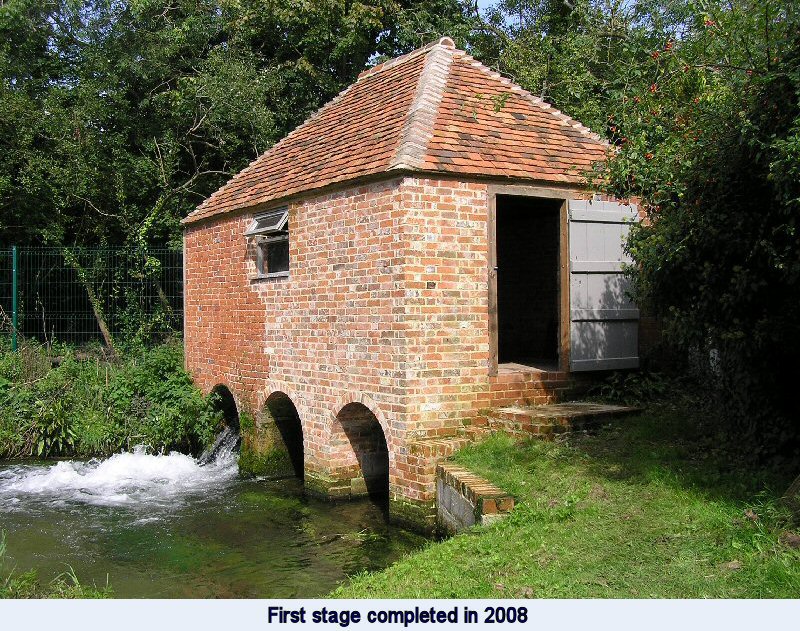 Members of The Alresford Society were determined to try to save the building, and two individuals underwrote most of the £15,000 needed for the initial and urgent restoration. The Alresford Society approached New Alresford Town Trust (a registered charity), who agreed in principle to support the project. To put this into effect, while protecting it from financial risk, the Trust created a separate company – Alresford Eel House Restoration (AEHR) to manage the repair, maintenance and safety of the building.

The landowner granted AEHR a 99-year lease on the building at a peppercorn rent. This enabled the company, led by the late David Goodman, to search for charitable grants and tax efficient donations for reconstruction. They secured funding from Hampshire County Council, Winchester City Council, New Alresford Town Council and The Alresford Society, while donations from 90 local individuals and corporate bodies added to these grants, raising the funds required for the first stage.

This work (completed in 2008) cleared the collapsed foundations and replaced them with a concrete pad to fill the five-feet deep water-scoured void beneath the building. The external structure was also restored - rebuilding and repointing walls, replacing roof tiles and reinstalling the original trap. The aim was to make the Eel House, as far as possible, exactly as it was. There is no commercial objective – any eels caught will be used educationally, and returned to the river – to continue their downstream journey.

Once the restoration was complete AEHR was wound up, and the assets transferred to New Alresford Town Trust. The Trust welcome visitors to the Eel House on about six Open Days each year, and by the end of 2021 over 10,000 people had seen it. Volunteers have been essential to the success of the Open Days.

In 2017 the Hampshire Footpaths Officer reported that the brick culvert archways on the up-river side of the Eel House, and the wooden footbridge they support, were in poor condition. The work to repair these structures was completed by Cain Bio-Engineering. This depended on the Town Trust again raising funds for the work. Local donors contributed £18,000 to the project, while Hampshire County Council contributed some £4,000 to reinstate the footbridge. This brought the total raised since 2006 for the Eel House restoration to over £65,000.