In 1694, two spinsters, Priscilla and Rebecca Worlidge of Bramdean, sold the parcel of land on which The Old Fire Station stands to Daniel Veck the younger, a fellmonger. The document of sale describes the site has having a thirty-four feet frontage on to Broad Street and a drawn plan is attached showing it to be very similar in size and shape to the plot that exists today. In the ensuing decade Daniel Veck built his dwelling place and established the permanency of his woodcutting yard. By 1704, when he mortgaged the site to a brick burner, named William Fry of West Tisted, the plot was called as a 'messuage' - a house with outbuildings and land.

We know that the Veck family held the title of the land through many generations. In 1751, Daniel Veck's grandson, also called Daniel, had his house insured with the Royal Exchange Assurance Company. It is described as brick built, part tiles and part thatched. On the back of the insurance policy are handwritten notes of the annual premium payments of five shillings from the date of inception through to 1778. The insurance policy ceased at that date because in 1777, Daniel had leased the messuage for fourteen years to John Hart junior and Bulbeck Dancaster the younger. They were wool-staplers.

The last of the Vecks to hold title was the Reverend Henry Aubrey Veck of Forton, Alverstoke, who inherited in 1843. When he died his widow sold the plot to William Bailey, a boot and shoemaker. Bailey changed the usage of the buildings on the site. Upon his death there were two houses, or cottages, one occupied by the Bailey family and another by a tenant, George Hall.

A local benefactor, Mrs Susanna Eliza Covey, purchased the two cottages from Bailey's widow in 1880 and it is there that the modern story of The Old Fire Station begins. Woodcutters, brick burners, wool-staplers and boot makers had all earned their livings over the centuries at 54, Broad Street, but now it was about to become a civic amenity.

The minutes of a meeting on 21 September 1881 recorded by the Clerk to the Bailiff and Burgesses of New Alresford state, 'It was resolved that an offer made by Mrs Covey to present the Corporation the site of the cottages recently pulled down at the north east corner of Broad Street be accepted and that Mr Hunt be asked to prepare a specification and an estimate for a building to be erected thereon for the reception of the Fire Engine.' 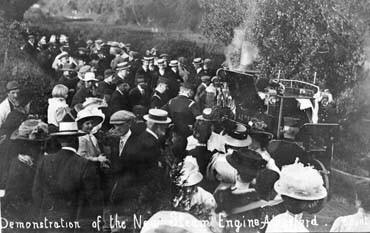 The garage for the vehicle was built at a cost of £120 and completed the following year. In those days fire engines were comparatively small and pulled by horses. It was a relatively new venture for a small town corporation to own and run one. Previously insurance companies had organised all of the fire engines. They made sure that they only put out their own fires by placing a 'fire mark', a plaque, on the buildings that they insured. If the fire fighters were called to a fire and didn't find their own plaque on the walls, they turned tail and let the flames do their worst.

The Bailiff and Burgesses didn't have long to play with their new civic toy. The Municipal Corporation Act of 1883 established parish and district councils throughout the England and Wales and fire services were taken into their control. The Corporation of New Alresford failed to secure its continued existence as a borough. The Bailiff and Burgesses opted instead to establish a 'scheme' under the Charities Commissioners, for the future administration of borough property. This led to the formation of the New Alresford Town Trust as a charity in 1890.

Amongst the assets of the Trust, noted in the minutes of the first meeting of the trustees, was the freehold of 'The Fire Engine House'. The building was leased and rented to an official body that, by 1901, had become the Fire Brigade Committee of Alresford Rural District Council. The terms of the lease were that the Trust was responsible for maintaining the structure of the building plus the surrounding grounds and the local authority for internal and external decoration. The rent was five pounds per annum.

The minutes of a meeting on 16 August 1901 duly record, 'That the Town Trustees considering the object of the Fire Brigade Committee have in view of their application for an increase in accommodation in the Fire Engine House are prepared to do all in their powers to further it.' The Trustees raised the monies to build the extension and charged Alresford Rural District Council five percent interest on this amount in addition to the rent already being paid.

In the late nineteen thirties Alresford lost its Rural District Council status and was incorporated into that of Winchester. By this time the fire station building had become too small for more modern motorised engines and the building ceased to be known as 'The Fire Engine House'. The sign was taken down and it became instead a sub-office, housing clerks to the local council. Meetings of the New Alresford Parish Council were held in a chamber within the building for many years.

During the Second World War the site was sequestered by the government and became home to the ARP, officials who were responsible for ensuring that everyone in the town complied with the air raid precautions. Every house was issued with blackout curtains and regulations stated that no glimmer of light should be allowed to escape from windows or doors from dusk until dawn. Even bicycle lamps had to be partly shielded at night. To help people get around in the darkness the ARP painted the kerbstones at the sides of the roads alternately black and white. They looked like miles of liquorice allsorts laid end to end.

In 1946 the Town Trustees re-leased the building to back to W&RDC but the local authority would only agree to a low rent and a rolling one-year contract, irritations that were to plague the Trustees for nearly thirty years. These reached a head in 1955 when the Trustees tried to impose a new fifteen-year contract at an increased rent and again in 1966 when the City of Southampton Water Department requested that they take over the lease from W&RDC, after yet another local government reorganisation. The Trustees' ambitions were rebutted on both occasions.

In the Town Trust minutes of 19 September 1963, the building is referred to as 'The Old Fire Station' for the first time. Ten years later the rumbling sore about the rent and the terms of the lease reached a crescendo when the Town Trustees, at a time of high inflation, tried to increase the rent from £50 per annum to £150. 'Not possible because of restrictions on government spending', replied Southampton Water Authority.

In 1974 the Trustees began to explore possible future uses of The Old Fire Station if it were to become vacant. The possibilities of it becoming a town museum or a library were both mooted but rejected due to worries about vehicular access on a blind corner. Changes to the structure were suggested and then in turn rejected as it became clear that the Trustees were responsible for the preservation of an historic building. They also discovered that they were at the mercy of the planning authorities who could, by the nineteen seventies, regulate on possible future uses for buildings.

A lease was signed in 1976 letting the land and building to New Alresford Parish Council who had continued to hold their meetings there. The Old Fire Station was used as an office for the Parish Clerk and as council storage space. For an annual rent of £160 the lease permitted the council to sublet the two parking spaces on site to nearby residents.

The Parish Council gave six months notice to quit in 1982 when their new offices at Arlebury Park became available. After a long haggle with the planning authorities, during which the Town Trustees explored selling the site, developing it themselves or leasing it piecemeal for parking, offices and storage space, it was finally resolved that the only option available to them was to let the whole site to one tenant. In 1983 a successful planning application was made to change the use of the building to house a furniture restoration workshop that was run by a local businessman, George Watson, for the next seventeen years.

In 2002 another planning amendment allowed the retail sale of small items of furniture, the leaseholder then being Nicola Johnson Interiors Limited. The current occupant, Andrew Lawes, took over the lease of The Old Fire Station in 2004 to run his picture framing business. In 2018 the Engine House behind the big red doors was converted to house the horse-drawn 'steamer' fire engine. In 2020 the rear of the Engine House was refurbished and the two now house the Alresford Museum.

We can only wonder what else will happen at 54, Broad Street over the next four hundred years and ask ourselves 'Will it be as interesting?' 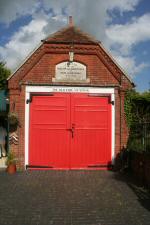 The official address of The Old Fire Station is 54, Broad Street, New Alresford. From the T-shaped centre of town, proceed north down the hill towards the river. The last building on the right, before you cross the road bridge over The Soke, is The Old Fire Station. Today this Grade II listed building houses Andrew Lawes' gallery and picture framing business but he is only the last of a long line of occupants. This is a site with a history that can be traced back to the seventeenth century.