How do eels live and die?

Eels are found in all European countries with a coast, and until recently were probably the most widespread species of fish on the continent. Their ability to leave the water and move across damp ground allows them to colonise lakes and reservoirs not directly linked to a flowing waterway. European eels (Anguilla Anguilla) start life deep in the Sargasso Sea, off the East coast of the United States. During their first two years they drift on the Gulf Stream towards Europe. In Eels and People (2014) Righton and Roberts wrote:

Scientists have been puzzled and inspired by eels, and details of eel biology are still being refined. Eels undergo a lifetime of change, beginning as they hatch from eggs as (leptocephalus) larvae – which do not look like eels at all. They are transparent and leaf shaped with tiny heads, ferocious teeth and a large gelatinous body. The shape is significant, because although they can swim, their journey depends critically on ocean currents helping them drift, rather like leaves on the wind, to their destination – a journey that we believe takes 2-3 years.

During that journey they grow from larvae into (saltwater) ‘glass eels’ (tiny replicas of the adult, just a few centimeters
long) and during spring they reach the European coast, forming huge shoals that wait for the water to warm. When it exceeds 10 degrees C, they enter an estuary or river and change into freshwater fishes, known as ‘elvers’. Their colour also changes to brown with yellow flanks as they move upstream to colonise suitable territories in rivers, lakes or marshes They will live there for 15 to 20 years – eating small fishes and other creatures.

When fully grown, the eel is almost snake-like – with a fin along the length of its body, and up to a metre long. In time it lightens to a silver/blue colour – hence ‘silver eels’.

After perhaps 15 years, eels’ instinct is to return to their birthplace to breed. They move down (in this area) the River Itchen and then the Solent estuary – turning back into saltwater fishes as they go.

We might expect them to turn right (west) on reaching the Solent. However, marine scientists have developed tagging systems, which allow them to attach a small satellite tag to a fish, which they then release to continue its journey. The tag automatically transmits information via satellite back to a research team, who are then able to map the eel’s route. A study by Verhelst and others of eels migrating from Europe published in 2022 suggests that many turn east, allowing the prevailing currents to take them up the North Sea. They round the North of Scotland and then go far down into the Atlantic (towards the Azores) – before eventually turning west and north again towards the Sargasso Sea. The journey is perilous, crossing an ocean amongst whales, sharks and other predators.

At the end of the journey the female must be exhausted, and her only task is to find a mate or mates with which to spawn before the remaining energy is spent. That done, and with a new generation of eels starting life, the purpose of a silver eel’s life is fulfilled. There is no return journey. 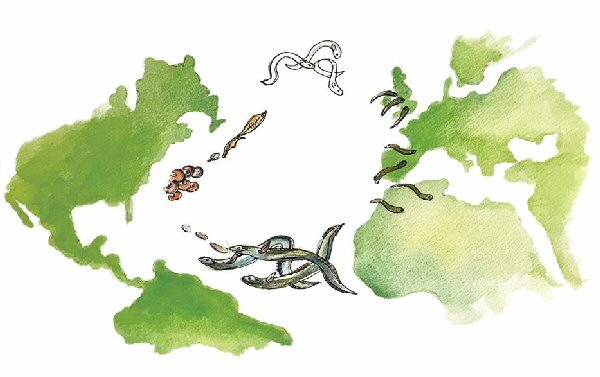 Research by Rolvein published in the Proceedings of the Royal Society B (2016) and by Freese in Environmental Pollution (2017) implies that as female eels near the Sargasso Sea, much of the energy in their body – intestines, stomach, but not the spinal cord – changes form, and is invested in growing the ovaries to enhance the production of eggs, on which the species’ survival depends. ‘They look just like a sack of eggs’ said one of the scientists who made this discovery.

Since no-one has ever found a mature (egg bearing) European eel in the wild, the researchers reached their conclusions by studying natural eels which were approaching maturity, and mature eels that had grown in captivity. They used non-invasive computer-imaging technology to scan the eels.

We can only assume that male eels release sperm in the same area, which comes into contact with the eggs and fertilises them. The males die, as their function is complete: no dead eel has ever been found in its natural environment. Fertilised eggs turn into larvae, and the remarkable lifecycle begins again swept to Europe on the Gulf Stream.